At the peak of the summer, every homeowner hopes that they’ll achieve that rich, green lawn without the blight of brown or yellow spots. But even the toughest lawn care regimen can fall prey to the many varieties of lawn fungus. Brown spots, yellow rings, or even a sudden family of tall mushrooms can emerge in your grass without warning.

What is lawn fungus and how can you keep it from plaguing your yard? To start, it’s important to know what to look for. We’ll help you determine if you have lawn fungus in your yard and what to do when you find it. Luckily most lawn fungi are easy to remedy with simple anti-fungal treatments paired with preventive care. 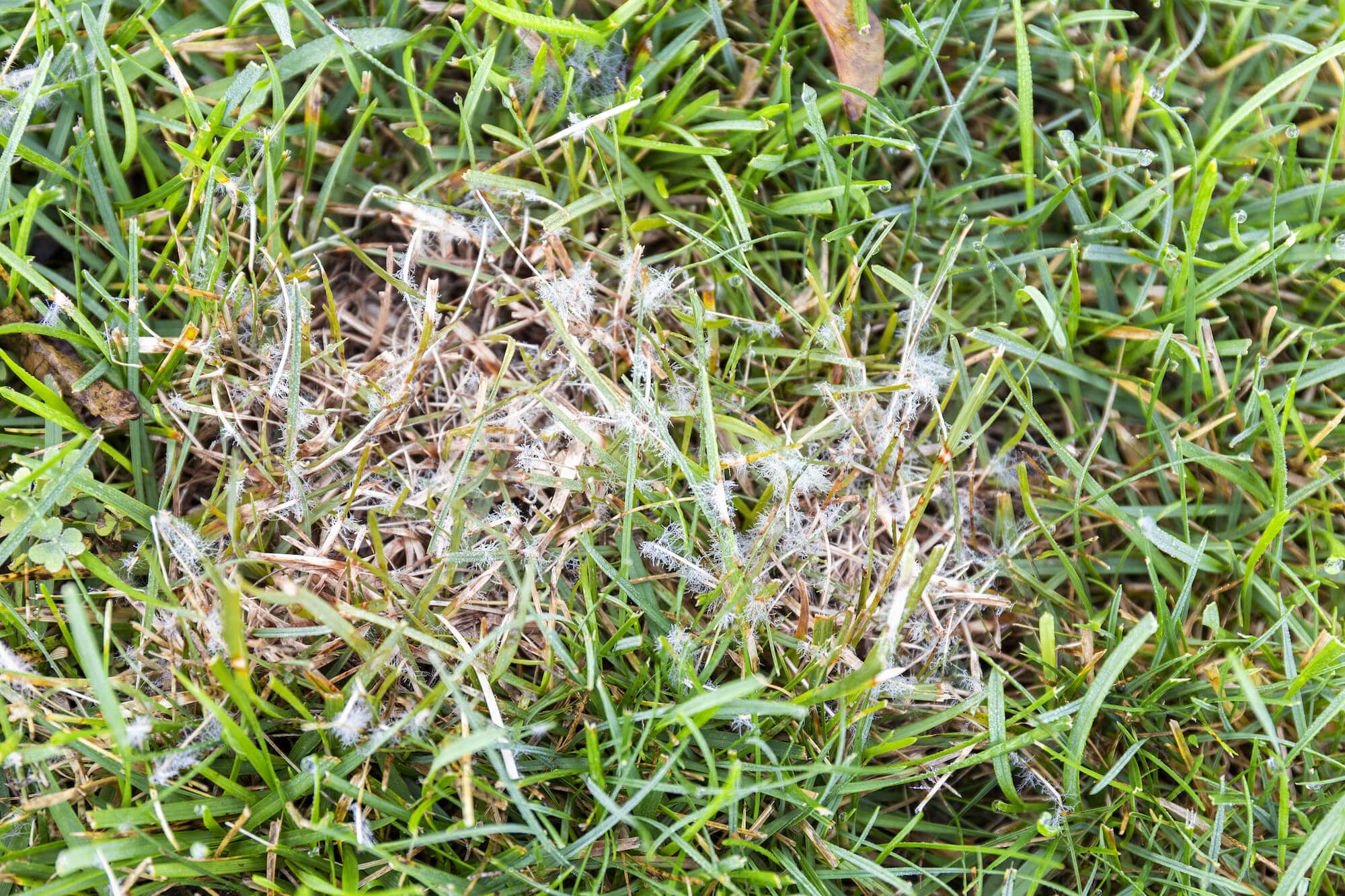 How Do You Know You Have a Lawn Fungus?

One of the trickiest things about identifying turf disease is differentiating it from other common issues. Many of the fungi infestations below can appear like other lawn concerns throughout the year. In most cases, fungus will appear as brown or yellow spots, rings, or patches on your lawn.

However, in some cases, these patches may be caused by:

The most common issue, however, is lawn fungus, and many of these issues can lead to lawn fungus even if it began as a smaller issue at first.

The best way to identify lawn fungus is to speak with a professional landscape expert, but we’ll help you get started if you’ve spotted something concerning in your yard. When exploring each possibility, we recommend looking at the:

Your Guide to Common Lawn Fungi

Lawn fungus is common throughout the entire country, but particularly prevalent in areas with high humidity and frequent precipitation. Fungus typically requires high moisture to flourish, through damaged grass, incorrect fertilization, or even planting the wrong type of grass in your region.

Here are some of the most common types of lawn fungi in the US and how to treat them.

Brown patch is one of the most common turf fungus varieties. It affects nearly all cool-season grasses and a small handful of warm-season species as well.

The issue can pop up quite quickly—especially in high humidity and temperatures in spring through early fall. Brown patches will appear as non-symmetrical yellow or tan circles in your lawn, typically larger than six inches wide. Its border may be darker in color with the center of the circle often falling in on itself.

If you look closely at the blades of grass, you may be able to spot white film on the morning dew as well.

You are most likely to spot an outbreak of brown patch when the weather rises between 65 and 80 degrees. Heavy rains, high humidity, or overwatering could cause an influx of the fungus to grow. In most cases, however, it was already dormant in the ground before it caused the rings in your lawn.

Brown patch is typically encouraged by:

Since brown patch flourishes in high humidity and highly moist environments, pay extra attention to your watering, fertilizer, and drainage efforts. Overall, most types of grass without extensive brown patches will heel without fungicides.

For example, you can:

Bluegrass, red fescue, and Kentucky bluegrass are most susceptible to this common lawn fungus. Unlike brown patch, you may have more luck catching it early in the game when it shows its first signs of forming.

White spots may appear on the tips of grass as the fungus begins to form, and will eventually turn the whole blade yellow, tan, or rusty brown. The patches of turf form over time, appearing early on as a frog-eye shape and then expanding out as wide as 18 inches or larger.

The patch itself is much less compact compared to brown patch, appearing in swirls and webs instead of circles. Eventually, the affected grass will fall in on itself and look sunken compared to the healthy grass in the rest of the area.

Much like brown patch, summer patch flourishes in warm areas with high levels of moisture. It is particularly common in parts of your lawn that suffer from poor drainage from either a sloped lawn or highly compacted soil.

The fungus prefers areas with direct sun, especially if there is a constant source of water nearby during the hotter months. Soils with an unnaturally high pH or prone to drought are particularly prone to summer patch as well.

Identify summer patch by its shape, the effect on the grass blade, and by learning about which variety of grass you have in your lawn. If you check all the right boxes, use the following treatment and preventative steps to stop summer patch:

Kentucky bluegrass and creeping bentgrass are prone to a common fungus known as pink snow mold, especially if your turf is still young. Pink snow mold actually does not need snow to form, and can blight grasses anywhere between 30 and 60 degrees.

Small circles of this mold will typically form on your turf, eventually branching out into larger areas when carried with the flow of rain or melted snow. As its name implies, pink snow mold takes on a pale white and pinkish hue, especially around the edges of the circles.

Unlike pink snow mold, gray snow mold requires ample snow or leaf coverage for a long period of time to form. The large irregular patches are often spotted as soon as the snow begins to melt. The gray-white mold is often visible on the leaves of grass themselves.

Snow and leaf insulation does contribute to pink snow mold, but it can also grow when thatch or grass coverage raises the moisture level too high. The fungus that causes the overgrowth can travel with water runoff or fall leaves on your grass.

When the unfrozen ground becomes trapped beneath an incredibly dense layer of snow, leaves, or brush, fungus that was already living within the turf can flourish. The areas must typically be covered with the layer for more than 60 days to fully develop.

Remove piles and layers of leaves from your lawn before they create a dense layer over your lawn. Be sure to cut your grass lower in the fall to encourage airflow in your turf during the spring and fall. In some cases, chemical fungicides are necessary to limit the pink snow mold damage.

Luckily, gray snow mold tends to only affect the top portion of the grass, instead of the roots. Reversing this variety has a lot to do with controlling long periods of snow or leaving coverage on your lawn—especially for weeks at a time. Most importantly, avoid fertilizing your lawn with nitrogen too close to the first frost.

Do you have small coin-sized spots of dried grass across your lawn? This could be a case of dollar spot—another common fungus. In its infancy, the fungus creates a collection of dollar-coin-sized patches of red, brown, or yellow grass. Look closely at the leaf, and you’ll find a distinct brown band across the blade.

This fungus can affect both cool and warm-season grasses, especially during seasons with high humidity but little rainfall.

Unlike the other fungi on this list, dollar spot typically thrives when the grassroots are dry and shallow and leaves are wet from dew or sudden rainfall. Dense soil that keeps moisture from permeating below the thatch is particularly prone to this disease.

Pay extra attention to your grass if you’re experiencing a very hot summer and period of drought. Water your lawn once to twice a week with a drenching layer and ensure that the water reaches sufficiently below the soil’s surface.

You can help your soil by aerating and dethatching your lawn at least once a year, especially before the summer.

In the early days of powdery mildew disease, you may spot a thin layer of what looks like white flour sitting on your grass. The fungus begins by growing an exposed section of your turf and can make your grass turn brown and die after prolonged exposure. The fungus also makes your turf more susceptible to doubt and high heat.

You’re likely to find powdering mildew in shaded areas of your lawn, especially spots protected from the sun throughout the season. It thrives in cool, humid temperatures, making the spring a prime time for growth. Without additional sunlight and airflow, the fungus can plague both your turn and surrounding plants.

Prune trees and large shrubs in your yard to encourage sunlight to typically shaded areas. Also avoid watering your lawn too late in the day to ensure that the water properly evaporates. It is also important to reduce high-nitrogen fertilizers in shaded areas to avoid disease.

A wide range of fungi can cause the often confusing ring of either brown or vibrantly green grass as well as visible mushrooms in your lawn. The fungi feed on abundant organic material in the ground, expanding outward to form one or several concentric circles.

Since the fungi can damage and block the soil beneath, the grass in the rings may eventually brown and die out completely.

The three types of fairy ring all enjoy feeding on extra organic material, either from overgrown thatch, overly mowed grass, or a recently removed tree trunk. The issue is particularly common on golf courses.

The imbalance of organic materials in that one area can cause this imbalance in color, typically throughout the warmer seasons of the month.

Fairy ring will typically take care of itself after consuming the extra organic material, but there are several preventive measures as well. Dethatch your lawn at least once a year to break up too much growth and use a core aerator to redistribute the soil. These tasks are particularly important after removing a tree trunk or large shrub.

The TruGreen team approaches lawn fungus and turf disease with an eco-conscious eye. By using integrative methods like soil amendment and analysis, we lower your need for fungicides or long-term treatments each season.

Most importantly, TruGreen has locations with trained experts up to speed with the most common lawn issues in your region. Our team can:

If you’re concerned that you have a fungus or turf disease on your lawn, contact a TruGreen specialist for a free consultation. We aim to provide peace of mind while restoring your lawn to its original lush and healthy appearance.